Owls were something of Anissa’s spirit animal. They have since become mine.

You died two years ago today.

Time flies, even when our shared fandom isn’t breaking my brain on what seemed like a weekly basis for a while there in 2012. I won’t lie, that first year was hard, especially with all those Improbable events coming true reminding me over and over of you not being there to share them. The good news is that it’s all gotten way easier, as I know you would hope. I still get a stab of nostalgia when one or two tunes come up on my playlist (Dancing Queen, Sometime in the Morning), but those are a lot less regular. Every so often I’ll feel your presence—the last time was when you and Davy were standing just over Nez’s shoulder when I picked up that third and last signature on Listen to the Band. I’d bet $5 he sensed at least one of you too. Those moments are starting to hit less regularly now. I know that’s as it should be, and in a way I‘m glad of it. I’m living life in the now, which is what you reminded me to do. 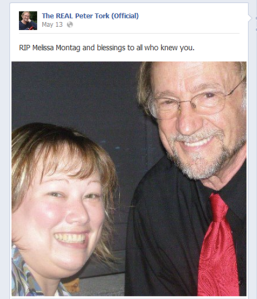 Do. Not. EVER. Ad Hominem. Peter. Tork. In. My. Presence. /friendly tip

Cin and Mich (and Mattie too!) are doing great—you know that, but I feel the need to say it since they didn’t take leave of their wits and start blogs. Like me, the three of them have grown a great deal over the past couple years, and are taking risks and having adventures of their own. Again, I know you know all that, but I need to say right here how proud I am to call them my sisters. A lot of the energy we were throwing into grieving and/or fandom during The Year of Our WTF we’re starting to channel into new things—new jobs (Mich is a trainer at her office now!), new family responsibilities (Cin is a “step” grandma again), and generally adding new chords in the tune of life. Cin (being “Mama Cin”) sent your mom a card for Mother’s Day the other day. We don’t talk to her as much as we did that first year, but she seems to be doing well also. We’ll keep an eye on her for you as long as she lets us, if that’s OK with you.

As for me, I’m starting to understand what a post-goal life, as I’ve called it, will entail. My purpose isn’t to be perfect, but to walk down my road, alongside friends whenever possible. I’ve finally learned something that it seems like you knew all along—if you build genuine, interdependent friendships with as many interesting and fun people as possible, they will give you guidance on the next steps on your road and occasionally you’ll get to return the favor. When I look back at my life, even things that occurred long before we met, I see that common theme. Maybe it’s just the lens I use to look at life these days. So I’m going to keep making friends, doing good and needed work, and strike out on the occasional adventure. Cultivating Wisdom, Courage, Compassion, and Silliness are far more important than satiating some internally contrived demon who told me my whole life that the price of my existence could only be paid by fulfilling some grand and glorious destiny. That voice’s power shattered the week you died, and I am much happier living life on my terms, slowly but surely gaining confidence that I am in a good enough place, and that the journey of life itself will lead me to even greater treasures than I can imagine. I only wish that the lesson hadn’t come at so high a cost.

Thanks, Sis. Tell the Midget I said hi, and that if he’s feeling poltergeisty that the aforementioned 3-signature Listen to the Band Box set is on the top shelf of my office bookcase. I’ll leave a sharpie out, but if he doodles a Hitler ‘stache on any of the other guys we’re gonna have a problem. 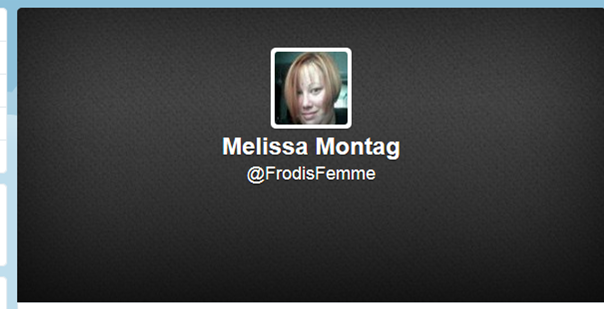 You snooze, you lose when it comes to awesome twitter handles. It’s still up BTW. She didn’t tweet much but she did go after one or two jerks back on Leap Day. (it was a bad idea to ad hominem Peter in earshot of Anissa too)

I don’t know what comes next—at least I now find that realization more freeing than worrying. If one’s value as a person comes from becoming fully myself and helping others to do the same, then the next steps will become obvious. The question, of course, is where that leaves Fandom Lenses. There are only so many hours in the day, and my motivations for writing here have shifted since this time last year, to put it mildly. To mangle Men in Black, I have been reminded time and again over the last couple years that a fan is (or at least can be) smart. Fandoms are dumb, panicky dangerous animals and we all know it. I have less patience with idiocy than I perhaps should. If I keep doing this thing I can’t get sucked up in the drama and nonsense over unimportant matters, if only because I decided many years ago that I need my life to be about more than that. However, it may well be impossible to include a fandom in one’s social life without accepting that there will be occasional woes. Wherever people go, drama follows. It’s doubly true when talking fandoms, for some odd reason. So the question is…Is Fandom Lenses still worth the hassle?

I don’t think I know the answer to that question yet—at least not consciously. If post ideas crop up, I’ll write them as other commitments permit and share them here. My gut tells me most of them probably won’t be Monkees-related, but I’ve thought that thought a few times already only to be proven rather wildly wrong. My posts, if any, will be what they will be. I think Classic Who. Maybe some long-delayed talk about My Little Pony. But who knows? And that brings me to the second part of the answer to my question.

My readers, ultimately you know what’s next for this blog. I sense that if it stays active, it’s going to be changing. A lot. What I write may engage you, or others. If it does, you’ll stay and continue the conversation here, or on facebook or tumblr. If it doesn’t, you’ll move on. And if you move on, I probably will too. But as long as you’re reading (and I have something to say), I’ll be writing.

Thanks for everything you’ve done for me, too.

One thought on “The years have passed, and so have I…”