Before anything else, I’m sorry. You’ll find no pussyfooting about Kevin Spacey here before I cut to the chase *ahem*. I apologize for possibly crossing the line in my review of your book. Alongside my critiques of the lightly-sourced factual claims that can be found throughout your books (which I stand by and we will probably just need to agree to disagree on), I made personal comments about you as an author in my essay that I now regret with the benefit of hindsight. Those comments were based on first impressions or secondhand stories. They were also filtered through a haze of shock and an urgent desire to make sense of revelations that had left many of my friends reeling. At the end of the day though,  two comments in my review of Monkee Business bordered on personal attacks, and were lazy writing born of lazy thinking. Some would say (even have said) that you’ve probably heard a lot worse from others in the fandom over the years. Others might argue that I did nothing to apologize for, or that if the tables were turned, you would not apologize for making ad hominem attacks on someone you were writing or speaking about. True or not, those arguments are irrelevant. I expect better of myself.

“I am WELL AWARE of Lefcowitz’s … occasional tendency to leap to wild conclusions and portray his extrapolations as fact.”

You see, Eric, we’ve never talked. Long story short, I’m going to the Monkees Convention.  It’s my first MonkeeCon, and given that I have similar feelings about conventions/collecting that Nez does (I dropped that C note to talk for 2 minutes and slip him a thank you note via a book about the etymology of curse words, not really for a photo or signature), this will likely be my last one. For about three days I was excited–gleefully buying a plane ticket and weighing the merits of the con hotel versus a rental car and choosing between Nez show options and levels of admission passes. It all made for a delightful brain break while outlining the lit review for my dissertation AND dealing with an insanely busy first week of the semester at work. I was also a pleasantly surprised at the number of likes and reblogs my con posts got on Tumblr. And then it hit me–I’m not “just a fan” anymore. In a tiny way,  I’ve become a Name. I’m not at the Naked Persimmon or  Iain Lee level of notoriety (thank the gods), and I’ll probably never write a fandom book like you or my friend Melanie. That said, I’m not quite an anonymous fan anymore, although I doubt any Monkee could spot me on the street. Then, I found out through a chance email that you were coming to the con, and I remembered that you’re a big part of WHY I’m a Name. My review of your book is still my most popular post most days, over 6 months later. In that moment, I crashed down to earth from my fangirl high, and re-reading my review of your book for the first time in months only made me feel worse.

You’re not just a name on a book or a disembodied voice talking of Micky Dolenz’s alleged “crocodile tears”. You’re a human being who, like me, probably screws up on occasion. I don’t know you beyond your Monkees books and that time you called into a radio show right after Davy passed. I can’t speak for anyone else reading this, but I spent that horrible day exchanging gobsmacked facebook messages with Cin, Anissa, and Mich, rifling through my DVD shelves to find Success Story,  and yelling at our cats. It was the second to worst day of my 2012, and I was in no fit state to talk sensibly to my husband, let alone a radio DJ. I can only imagine it was far worse for you. 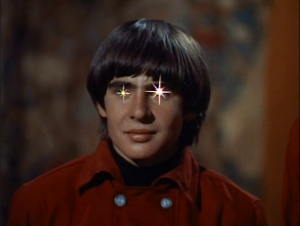 Yes, my sexual awakening was “My Princess! My Princess!” My Bridge! My Bridge!” (It really explains a hell of a lot…)

I can’t speak to how (straight) guys get into the fandom, but for us ladies, it’s generally a connection made very viscerally, and very young. There’s a reason I half-joke that watching my first episode (Fairy Tale) at the age of 9 was my equivalent of Michael Corleone being hit by the thunderbolt–though maybe the better parallel is the numerous times Davy got stars in his eyes. I came and left the Monkees fandom many times over the years, but I never stopped being a fan, even if I barely thought of the guys for years at a stretch. I like to think I approach the fandom from an adult place now, but there is a part of me who is still that lost, lonely nerd girl spending her afternoons watching a fantasy of 4 adorable boys, all of whom were always such good friends. Ask ten lady fans and I bet at least 8 of them would tell you a variation of the same story. That connection, of course, is why a huge section of fandom flipped their lids when your book came out, as I’m sure you knew they would.

The best Christmas present I had received, or would ever receive. (Well, OK, the drum set in 8th grade was a close second)

I have a lot of younger friends from later “generations” (I’m 3rd gen/80s, if that matters) who were hurting when they read your book. When I wrote that review, I wasn’t thinking about you. I was thinking about the ten year old girl on Christmas morning 1987 who flipped open A Manufactured Image (The closest gift I ever got to Ralphie’s Red Ryder BB gun) only to find a photo of Davy *gasp* smoking, then over the next hours learned of Peter’s drug bust and many more of the guys’ famous moments of Fail. That’s heavy stuff for a suburban 5th grader in the 1980s. I always thought I understood that the guys on Nickelodeon that I swooned over were really 4 living, breathing men who were all older than my father, but I didn’t really grok the implications of their reality in my heart of hearts until that day. Long story short, I cried myself to sleep that night. Fortunately, I soon rose to the occasion and started seeing the guys as flawed but decent human beings who did their best with the hands they were dealt. That choice of lens (which I applied to other issues as I got older) made all the difference in my life as a human being, fan, and even as a scholar. Eric, when I read your book I wanted to help shocked fans to come to that same place of peace about the crimes Davy more than likely committed. Unfortunately, you got caught in the crossfire.

Which brings me back to the con. After finding out you were coming, I realized that I’d been thoughtless in my own way. I don’t know who told you about the end of the 2011 tour, and it’s no more my business than was the story of Davy’s alleged misconduct. But I can’t help but think of a strange alternate world where I was a Name writing a Monkees book. If someone told me what you were told, I truly don’t know what I would do. I can tell you I would be dealing with a major internal battle between the forces of truth and kindness. And, God forbid, if it had been Micky or Peter himself who delivered the scoop, my internal conflict would only have been worse. For all I know you told the story you told at their request (it would certainly explain Micky and Peter linking to the R&RHOF article where you teased the bombshell), knowing full well that you would be the one to reap the whirlwind. I can only imagine that the money factor made things that much more complicated. Last summer might well have been the last best time to put out a Monkees book and have it turn a profit.

I don’t know if we’ll cross paths next month, but I imagine it’s more than a little likely. I don’t know all that much about you, but I do know that you’re a Monkees Person. That implies you’re intelligent, willing to look beneath surface assumptions, and that you have impeccable taste 😉 . I also know that you didn’t contact me after I wrote my review (and it kinda went viral), which shows more forbearance and friendliness than I may have deserved. For better or for worse, you are interested in sharing a full picture of the Monkees, warts and all. Given I’ve tried to do the same thing in my own way in my blog, I certainly can’t fault you for that impulse.

See you at the con,

One thought on “Deeper shades of grey: An open letter to Eric Lefcowitz”